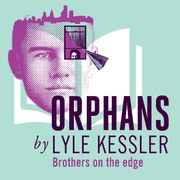 Set in a dilapidated row home in North Philadelphia during the 1980s, two brothers with no family, direction, or support lead a life where every day is a struggle to survive. Phillip is sensitive and reclusive, scared to venture far from his North Philadelphia home, and paralyzed by fear of further abandonment. Older brother Treat, violent in nature and a thief by trade, works the streets, trying to keep food on the table for the two of them. Worlds collide when Treat kidnaps a mysterious, wealthy businessman who soon turns the table on the two brothers. In a strange, hilarious, and moving way, he becomes their long-lost father figure.

Written by Lyle Kessler, Orphans premiered in 1983 at the Matrix Theatre in Los Angeles and opened on Broadway in 2013. The production of Theatre Exile’s Orphans is directed by Theatre Exile Founding Artistic Director Joe Canuso and stars William Zielinski, Dave Johnson, and Adam Howard.

RSVP for Orphans to add comments!