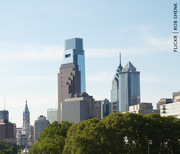 Just before 200 nations gathered in Paris to hammer out a climate change agreement, Philadelphia released its own report on how the city might adapt in the decades ahead.  Growing Stronger: Toward a Climate-Ready Philadelphia notes that 49 daily temperature records have been set here since 2000, 18 since 2010, and the Delaware River has risen about a foot in that last 100 years.  While Philadelphia historically suffered through 20 days of 90-degree temperature annually, thermometers now hit that number 40 times per year, a doubling.

Sarah Wu, Director for Planning in the Mayor’s Office of Sustainability, presents the city’s key findings, and will be joined by a panel of leading Philadelphia scientists, activists, and policy experts working on a climate-ready Philadelphia.

The panel includes David Masur, executive director of PennEnvironment and chair of Mayor Jim Kenney’s sustainability transition team; Raluca Ellis, Ph. D., environmental scientist for the Franklin Institute and director of the regional Climate & Urban Systems Partnership; Dr. Pouné Saberi, board member for Physicians for Social Responsibility and in Paris during the climate talks; and Saleem Chapman, the policy and advocacy manager for the Sustainable Business Network who works on environmental and social justice issues.

And we’ll involve you in the conversation as well—this is your chance to explore the future of our city as the climate changes.